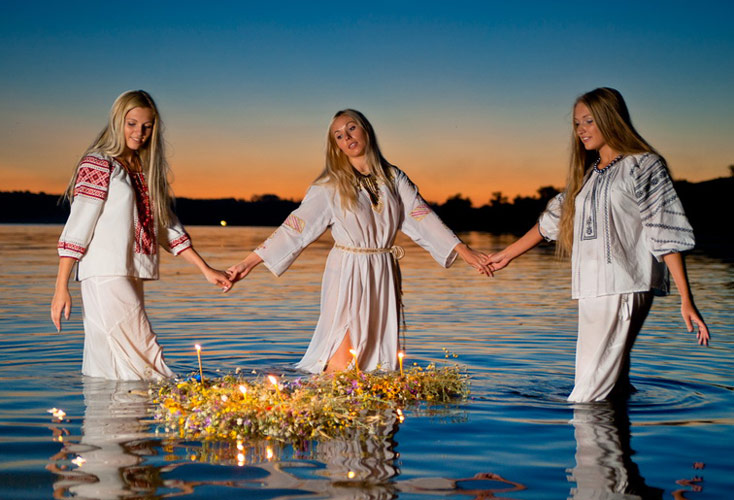 Ukrainian culture is littered with legends and traditions. Ivana Kupala is a holiday that celebrates the birthday of St. John the Baptist. Every year, Kupala night falls on the 7th of July. The traditions and activities associated with this holiday can be traced back to Pagan rituals and are often associated with fire and water. There are numerous legends and myths behind every activity that occurs during this holiday. The night is intended to be filled with laughter, singing and dancing and usually does not end until the sun comes up the next morning! This signifies a new beginning.

Midsummer Day is filled with rituals associated with water, fire and flowers. It consists of bonfires, wreaths and bathing. In many Ukrainian villages, the holiday still has sacred value – however, it is also celebrated worldwide by Ukrainians and Russians. Not surprisingly, this holiday has always been associated with various rituals, superstitions and beliefs that appeared in pre-Christian times.

Many of the rituals related to this holiday are connected with the role of water in fertility and purification. Traditional Ukrainian wreaths are typically made using various wildflowers including chamomile, periwinkle, poppies and violets – but different types of wreaths are created for different holidays and traditions.

In pagan times, it was widely believed that by observing the way a flower wreath floated in the water, a woman could predict her fortunes in love and marriage. A wreath that floated signaled love was imminent, while one that sank forecast that the woman would remain single. Young men would attempt to capture the floating wreaths to symbolically capture the hearts of the women who set them afloat. This ritual was traditionally carried out by unmarried women on the night before Ivana Kupala night.

As the tradition goes, once the sun has set, the youth would kindle a huge fire and begin leaping over it to make various predictions about life and love. Couples are meant to jump over the fire holding hands – if the couple’s hands are still intertwined when they land on the other side, it means they are destined to be together. If their hands have separated, however, the ancient folklore stipulates that the couple will soon separate. There are many other myths associated with flames during this night. Some people leap over the flames because it is believed that the act of jumping over the bonfire can cleanse them of illness and bad luck. Men also compete to see who can jump over the biggest flame; the man who jumps over the largest fire is believed to be the bravest and most courageous.

Aside from these traditions and rituals, Ivana Kupala night is widely celebrated as a night of fun and games. It involves music, dancing, and drinking and often lasts until sunrise. So if you haven’t experienced anything like this before, we suggest you get those wreaths ready, light those fires, and join us on July 7th!

Share this ArticleLike this article? Email it to a friend!
Email sent!